The shortlist of nominees for this year’s London Football Awards (LFA) has been announced. Chelsea have nominees in most categories, including Cesar Azpilicueta up for Premier League Player of the Year, won last year by N’Golo Kante. Chelsea Ladies Manager, Emma Hayes, is in contention for Manager of the Year award, won last year by Antonio Conte. The Chelsea Ladies also have three nominations and Courtois and Christensen are vying for a trophy on the night too. 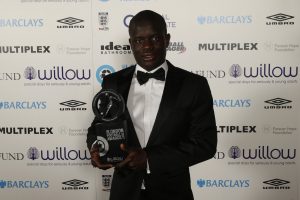 Football heavyweights have scored nominations at this year’s London Football Awards.  Andreas Christensen is up against the likes of Ryan Sessegnon for Young Player of the Year. Cesar Azpilicueta faces stiff competition in the form of Tottenham’s Harry Kane, amongst others, for Premier League Player of the Year, won last year by teammate N’Golo Kante. Thibaut Coutois is in contention for an award and the Chelsea Ladies look set for more success with nominations for Millie Bright, Katie Chapman and Fran Kirby in the Women’s Player of the Year category and Emma Hayes hopes to bring home the  Manager of the Year trophy, won by Conte last year. The winners of all eight awards will be announced at the prestigious event, hosted by Mark Chapman, at London’s Battersea Evolution on March 1, 2018.

The shortlist of nominees was agreed by an independent panel of judges and announced by sports presenter and LFA judge, Jim Rosenthal at the launch at Coutts’ historical head office in London on February 1.

Willow Life President Bob Wilson, said: “Once again this season, football in London – in the Premier League, the Football League and the Women’s game – has been dramatic and exciting.  The London Football Awards is a fantastic opportunity to celebrate the skills of our nominees, which we have seen on the pitches of the Capital over the last few months, as well as all the outstanding community work achieved by the clubs.  I’m looking forward to catching up with lots of friends and colleagues at this year’s London Football Awards on March 1.”

Nominees and winners of the awards have been selected by an expert judging panel from the worlds of football and media, from former players to major footballing bodies, and sports media, including Sky Sports, BBC, The Telegraph, Evening Standard and talkSPORT.

Standard tickets to the London Football Awards, including pre-dinner drinks and a three course meal, cost £225 per person.  Tables of ten are available for £2,250, Premium tables cost £3,500 and Legend Tables (for ten guests plus a legend) cost £6,000.

For more information and booking visit www.londonfootballawards.org or telephone Willow on 01707 259777.

Willow is the only national charity working with seriously ill 16 to 40 year olds to fulfill uplifting and unforgettable Special Days.

For some their Special Day is the opportunity to return some normality to their lives. For others it is the last chance to fulfil a dream. But for all, it is a life-affirming experience that can lift spirits, reunify families and be a source of strength when it’s needed most.

To date, Willow has provided more than 14,500 Special Days for young adults diagnosed with a life-threatening condition such as cancer, motor neurone disease, cystic fibrosis and Huntington’s disease.

The Charity receives no government or lottery funding and is totally reliant on the generosity of individuals, companies and Trusts to fund its work.