Stamford Chidge is joined by Jonathan Kydd, Mark Meehan and Dayne Whittle to look back at the 1997-98 season.

The 1997-98 season was described by Chelsea Historian Rick Glanvill as “turbulently successful” and it is hard to disagree and in Part One we review from pre-season to the end of the year.

With the arrivals of Ed De Goey, Gus Poyet, Tore Andre Flo and return of Graeme Le Saux, all of whom were to make a huge impact on Chelsea success, and the supporters were hopeful of a title challenge this season and a defeat on penalties to Man Utd in the Charity Shield did not quell those hopes.

But the senior members of the side, Vialli and Hughes, reminded everyone of their experience and class and got Chelsea off to an encouraging start to the season where we were rarely out of the top four.

It was the cup competitions where Chelsea thrived though and none more so than the European Cup Winners’ Cup. Slovan Bratislava were routinely dispatched and in the next round Chelsea faced Norwegian part-timers Tromso, beyond the Arctic Circle. One of the most surreal and fondly remembered games in Chelsea’s history played out when Chelsea lost 3:2 in a blizzard.

In the Coca-Cola Cup, it took penalties to beat Blackburn Rovers and extra-time to beat Southampton and in the league four matches are still remembered by anyone who was there. Nigel Winterburn’s last minute goal in the 2:3 home defeat to Arsenal; Patrik Berger’s hat-trick in the 4:2 defeat against Liverpool and old foe David Ellery; the 6:1 at the Lane where Tore-Andre Flo’s hat-trick was ably assisted by Zola as we annihilated Spurs in a match still sung about today and the 0:0 home draw against a Leeds United side managed by George Graham where they tried to kick Chelsea off the pitch.

As the year drew to a close, Chelsea were 3rd in the league having at one stage reached 2nd and still in the Coca-Cola Cup and European Cup Winners’ Cup with everything very much still to play for in the second half of the season, but trouble was brewing… 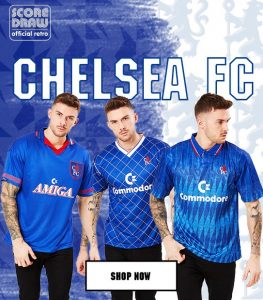