The away trip to Anfield had huge significance for me this season for two reasons. Reason one being it was the first time on an away trip I was actually able to sit with the away fans, not having to suppress my emotion or not chant Chelsea chants was like a new lease of life at an away game. 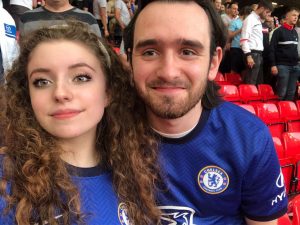 The second reason being it’s the first game I’ve been able to take my girlfriend to. She is also a blue and hadn’t previously been to see the Chels at the Bridge or away from home so I thought why not throw her in at the deep end?

We were eternally grateful that a fellow supporter got me the two tickets to the game so meeting a fellow blue amongst a sea of red was a daunting task, however once we’d located him and made our way into the away section, we could finally begin to relax. Myself and my other half quickly got our blue on and got straight in with the chanting. After some chat with supporters I felt relatively confident.

Building up to the game and during the warm up I was astounded at how incredible the away support was. Anfield was our stage and we was giving the home crowd a run for their money in terms of volume. ‘We are the Champions, Champions of Europe’ and ‘we know what we are’ didn’t seem to go down well with the scousers but hey, we are the best team in Europe…

We started the game so well and without overdoing the handball incident I believe with eleven men we probably would have won the game quite comfortably. Romelu Lukaku caused all sorts of problems and Marcos Alonso also was a thorn in Alexander-Arnold’s side.

The Kai Havertz goal blew the roof off in the away end and it’s just a shame we didn’t get to witness it our end, at least the Kop got to witness the genius of Havertz close at hand. Shortly after when Firminio was substituted the crowd obviously began chants of ‘you’re fucking shit!’ (Rightly so) and to my sheer amazement and somewhat amusement too, my usually polite and respectful girlfriend was joining in, at the top of her voice ‘YOU’RE FUCKING SHIT!’ I couldn’t believe it, our away support had corrupted her!

During the second half the support from the away end grew stronger and stronger despite the nerves of the Liverpool attacks being relentless. However once the clock hit eighty minutes and Thiago Silva had headed away yet another cross, I couldn’t help but feel we was going to get a point. We defended heroically all half and it didn’t seem to be breaking. The mite of the Liverpool attack just couldn’t break us down.

All in all a point was a fantastic result and I’m glad I can say I was there amongst the supporters helping create the twelfth man.

Introducing someone to Chelsea is also one of the most rewarding things I’ve done in a long time. At the time of writing it’s nearly been a week since we was at Anfield together and my Girlfriend is still humming (and sometimes chanting) Lukaku’s song amongst various other tunes we belted out too the home supporters. We both can’t wait to go again and hope the wait isn’t 18 months like it had previously been.