Chelsea FanCast on Love Sport Radio – the only 100% Chelsea show on the radio! Johnny Burrow and Stamford Chidge are joined by special guest, Tim Rolls, author of ‘Diamonds, Dynamos and Devils’; former Chairman of the Chelsea Supporters’ Trust; writer for cfcuk and Chelsea regular since 1967 to discuss his new book: ‘Stamford Bridge Is Falling Down’.

Rounding up the latest Chelsea news, with Chelsea rumoured to be signing Kovacic, does it make sense in the light of the transfer ban? Will a new manager get the best out of the Croatian international and former Real Madrid player?

Talking new managers, the wait for Frank Lampard’s appointment to be made official seems interminable. If, as expected, an agreement is concluded next week, which back room staff will Lampard bring with him from Derby. Is he the right man at the right time for Chelsea? Will his appointment go a long way to healing the rift between the supporters and the club? And with many pundits in the media claiming that the supporters will turn on Frank if he does not deliver the success they have become used to and now expect, Tim and Chidge set matters straight and explain why Lampard will get unequivocal and wholehearted support from the match going fans no matter what happens.

Support the Chelsea FanCast and become a Patron: 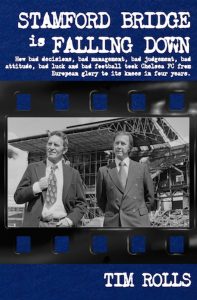 Tim Rolls discusses his forthcoming book ‘Stamford Bridge Is Falling Down’ which explores the causes of the decline which saw Chelsea win the European Cup Winners Cup against Real Madrid in 1971 only to be relegated from Division One in 1975. Tim delves in to an era when the great ‘Kings of the Kings Road’ side started to break up with star players such as Peter Osgood and Alan Hudson being sold after falling out with manager Dave Sexton. With the club bankrupted by the ambitious redevelopment plans, no money was available to rebuild the team with quality players and the club’s very future was threatened.

Tim discussed the idea behind the book and explains how Chelsea went from Euro Cup winners to relegation in four years, highlighting the key characters and stories involved. But are there parallels with modern Chelsea?

Tim is crowdfunding a hardback version of the book, including 24 photos, an index and a slip cover through Kickstarter. A single copy for the UK costs £25 (including p&p) – prices for one or two signed copies, and for different parts of the world, are listed at https://www.kickstarter.com/projects/timrolls/hardback-of-stamford-bridge-is-falling-down Backers will also get their names listed in the book.

In this weeks ‘Legend of the week’ sponsored by Classic Football Shirts, we choose Peter Osgood, one of Chelsea’s greatest players and a character central to Tim’s book. Tim and Chidge recall some great memories of Ossie from his playing days and his time with Chelsea before his untimely death in 2006.

Chelsea FanCast is broadcast on Love Sport Radio every Friday from 7.00-9.00 pm. LOVE SPORT is a London radio station and is broadcast on 558 AM and on London DAB along with numerous digital channels. You can listen from anywhere in the world. You can visit lovesportradio.com to listen live to the station and of course you can download LOVE SPORT apps in the android and IOS app stores. You can also listen to LOVESPORT radio through Radioplayer and TuneIn.