I caused a little commotion on Twitter last week when I called out some copy and paste work from a well known account.

It caught my eye because the actual journalist had quote tweeted the story and directly underneath on my feed, a tweet had been copy and pasted. 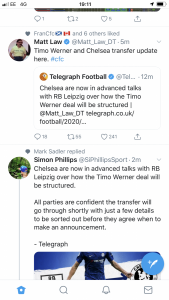 You might think it’s no big deal, but when the actual journalists make complaints you have to wonder if it’s ethical to do this.

Then again, you’ll see some ”news stories” of his, with high profile sources such as a cash and carry owner, in the Sun newspaper, so ethics might mean very little.

Who are we to judge?

I got quite a few replies saying they don’t have access to the Telegraph (or The Athletic, another favourite source to copy and paste them) so they need accounts like this otherwise they’d miss the story.

But that’s the whole point.

Instead, they see accounts like this, with almost 80,000 followers (I’m blocked now so can’t check) blatantly plagiarising their work, not providing any links to the stories or even crediting the journalist writing the story.

The account in the picture isn’t the only one, there’s many, many more, following the same techniques to appear knowledgeable or even worse in the know.

Lest we forget when The Chelsea Echo, under the editorialship of the above mentioned, ran a story about Callum Hudson-Odoi being close to signing a new Chelsea contract which was picked up and mentioned across a lot of media outlets.

This was in May 2019, the contract wasn’t done until September, and they didn’t have an “exclusive” then. Funny isn’t it.

There’s nothing wrong with using actual journalists work in the right way. Daniel Childs, Son of Chelsea on YouTube, does this.

Uses a story, showing the article, credits the right source, and then gives an opinion. Creates a conversation/debate on the story.

Just passing the story off as something you’ve stumbled across, and your followers should be thanking you for it is wrong.

This isn’t a hobby for those journalists, it’s a career. Them paying off a mortgage or putting food on the table, depends entirely on people subscribing to read their work.

Fakealists (new word for fake journalists, feel free to use) are stealing followers, readers, subscribers, and they should be called out accordingly.

I’d rather have followers who follow me for my own work, tweets, ideas, than 80,000 followers on the back of other peoples work.

But maybe that’s just me?